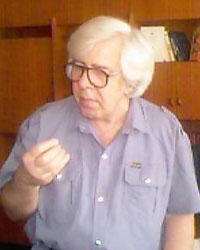 He was born on June 8, 1934 in Magnitogorsk, Chelyabinsk region.

His father, Blagoveschensky Nikolay Veniaminovich (1900-1952), was a forester, engaged in urban landscaping, worked as a forester on the Kola Peninsula since 1937, went through the Great Patriotic War (from soldier to major, had two orders and several medals). My grandfather was a gunsmith, for his services in the Japanese War he was promoted to officer and received a noble title.

Mother, Maria Dmitrievna Blagoveschenskaya (Pomerantseva) (1914-1997) was a teacher of the deaf and dumb, but she worked wherever she had to, raising 6 children.

He received his primary education at home (the Great Patriotic War was going on), went to school for the first time in 1945, studied at an accelerated rate and graduated from the ten-year school in the city of Kaliningrad in 1952.

In the same year 1952 he entered the Faculty of Mechanics and Mathematics of Moscow State University and graduated in 1957. The thesis on Markov chains was carried out under the supervision of R.L. Dobrushin and became the first independent publication. According to its results, he was recommended for postgraduate studies, but preferred to be assigned to work at the Joint Institute for Nuclear Research (JINR, Dubna, Moscow region).

At JINR, he worked in a Theoretical Laboratory (director - Bogolyubov Nikolay Nikolaevich) and was engaged in the Monte Carlo method applied to the Fermi model. There he also became interested in the problems of particle diffusion in the "bowels" of the synchrophasotron. This hobby led to interesting mathematical problems of using probabilistic models to analyze parabolic equations with small parameters. With this topic, he entered the graduate school of the Moscow State University Mehmat in the fall of 1959.

He graduated from graduate school two years later, in the fall of 1961. The scientific supervisor was R.L. Dobrushin, the department was headed by A. N. Kolmogorov, and the main inspirer of research on diffusion processes was then E.B. Dynkin. The dissertation "Diffusion processes with a small parameter and their application to parabolic partial differential equations of the second order" was submitted for the degree of Candidate of Physical and Mathematical Sciences at the end of graduate school, but its successful defense took place only in April 1963.

From autumn 1961 to September 1963 he worked as a senior researcher at the Computing Center of the Armenian Academy of Sciences, Yerevan.

In August 1963, he returned to Moscow and was hired at the Interfaculty Laboratory of Statistical Methods of Moscow State University, which was then organized and headed by Andrey Nikolaevich Kolmogorov. All scientific activity was connected with this Laboratory from August 1963 until the end of 1976, when the Laboratory ceased to exist.

The main activity of the first 5 years of this period was research on methods of statistical classification in spaces with increasing dimension. However, this did not exhaust the scientific problems in any way. At the same time, Yu.N. Blagoveschensky was engaged in statistics of censored samples (behavior of the extreme members of the variation series, additive estimates of distribution parameters, stability) and models of fatigue damage accumulation (fatigue curves, the "riveting" effect, model identification). In 1965-1969, a large study was conducted on epidemiological models of drip infections based on extensive material on diphtheria carrier. In 1969-1976, his main interests were related to the analysis of randomly censored samples. This work was carried out together with a practical analysis of data on the operational reliability of tractors together with Professor R.V. Kugel (Head of the Reliability Department at the head Tractor Institute, NATI, Moscow). And at the same time Yu.N. Blagoveschensky conducted extensive consulting work on statistical methods in the Laboratory (it is difficult to find a scientific field whose representatives would not appear among those consulting).

The next period was working in the photosynthesis department of the Interfacult Laboratory of the Moscow State University named after A.N. Belozersky, 1977-1987.

Since about 1979, Y.N. Blagoveschensky has been devoting a significant part of his time to work with soil scientists, with a group led by E.A. Dmitriev (Head of the Department of General Agriculture at the Faculty of Soil Science of Moscow State University).

At the beginning of 1988, the dissertation "Evaluation and verification of hypotheses on incomplete samples" was defended for the degree of Doctor of Physical and Mathematical Sciences. At the same time, Yu.N. Blagoveschensky moved to work at the Faculty of Soil Science of Moscow State University, dealing mainly with problems of quality of statistical methods, models of decontamination of herbicides, research of fractal properties of soils and conducting educational and consulting work. In 1994, Yu.N. Blagoveschensky received the title of professor in the specialty "Soil Science" (it should be noted that for several years before that Yu.N. Blagoveschensky participated in expeditions, studied solonets and their genesis).

Since the summer of 1991, Y.N. Blagoveschensky has been actively involved in the work of the INDEM Foundation, being an expert on the "measurement of immeasurable factors" in sociology and political science. He was one of the key participants in a number of pioneering projects. Here are just some of the big list: measuring the parameters of the corruption market (according to surveys and specially developed auxiliary examinations); Bayesian scenario forecasting in the field of politics and economics according to expert surveys; creating and testing a network model of mass consciousness; development of an approach to comparing the dynamics of the spread of the pandemic in different countries according to official statistics.

Under the leadership of Yu.N. Blagoveschensky, 6 PhD theses on mathematical statistics and 3 on the fatigue life of tractors and their parts were defended.

From other activities: Yu.N. Blagoveschensky was one of the leaders of the weekly seminar at the CEMI "Methods of multidimensional statistics and modeling of real processes", for many years he was a member of the editorial board of the journal "Factory Laboratory", participated in a large publishing project "New in statistics abroad" - was a member of the editorial board (additionally: sometimes – translator, sometimes - editor of the translation of this series of books in the publishing house "Finance and Statistics"). He has made numerous presentations at international conferences.

The total number of publications is over 200, co-author in 7 monographs and author of the book "Secrets of Correlations in Statistics" (2009).